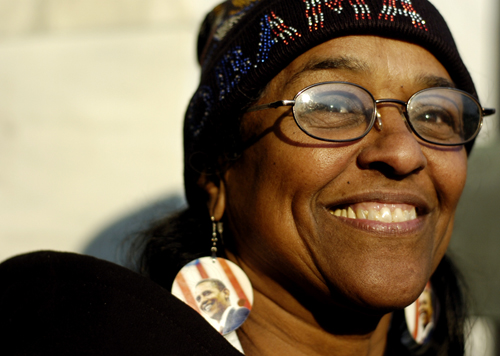 
Lifelong East Providence resident Onna Moniz-John spent her Martin Luther King Jr. Day navigating the Capitol grounds and standing in long lines stretched around and inside the Senate building to get her inauguration tickets.

This audio slideshow chronicles her journey from Providence Mayor David Cicilline's breakfast for Rhode Islanders attending the inauguration to the Hart Senate Office building where she received her official invitation for the inauguration and four tickets.

"Everybody is having a blast - total excitement. It is everything I expected and more." Ms. Moniz-John said. She was accompanied by her husband of 11 years, Alvin John, sisters Ronda Moniz-Carroll and Lorraine Rodericks, who grew up in East Providence, extended family member Lorraine Rezendes, of East Providence and and friend Maryanne Fonseca of East Providence.

In 2008, Moniz-John offered up her home as the East Bay R.I. headquarters for Obama's campaign during the primary season. She is the former Affirmative Action director for the city of East Providence and is still very actively involved in promoting black historical and cultural awareness in the community. She retired from her post last year because she was diagnosed with a brain tumor. She has undergone two surgeries and is now back to her usual energetic self.

"It was totally emotional. I still don't feel its real. It's still not sinking in." Ms. Moniz-John said of watching the inauguration. "Hearing it is nothing compared to being in the midst of it."

With all of the excitement of the inauguration, parade and parties, Ms. Moniz-John said she is exhausted now.

"I am beat to a pulp. All that walking and walking. It was not for the ill prepared, but we were prepared. We were dressed from the snuggies to foot warmers."